Walter posted a thorough update over at his site. Check it out.

Here are some key takeaways for the PFS operations area:

Cold weather over the past few days has dropped the Yellowstone and Boulder Rivers into marginally fishable shape. They would have gone lower, but the cooldown was accompanied by a VAST amount of snow and rain yesterday and today, so things are still pretty marginal.

As of right now, the Yellowstone is flowing at 7350cfs at Gardiner and 9870cfs in Livingston. “Safe” float levels are 10,000 in Gardiner and 12,000 at Livingston, with the float stretches that are safe limited to flatter sections without aggressive eddies, such as the Cinnabar to Yankee Jim, Carbella to Point of Rocks, or Emigrant to Mallard’s Rest sections. The Boulder is down to 1560cfs, with 2000 safe. I’m not sure if the large tree which forms a dangerous and almost impassable barrier on the Boulder at Spring Creek Campground south of Big Timber is still there or not.

At the above flows, streamers pounded on the bank on sink-tips, using 1X or heavier tippet, is your best bet. You may also move some fish on stonefly and large attractor nymphs drifted through bankside pockets, but you’ll lose a lot of flies doing this.

Neither river is low enough for more than very difficult wade-fishing. On the Yellowstone, concentrate on the steep, rocky banks through and just past the town of Gardiner, fishing the slow holes next to the banks.

Here’s the flow data for the Yellowstone River at Corwin Springs, near Gardiner:

Here’s the streamflow predictions for the river at Livingston. Predictions are not provided for the Corwin Springs graph. Subtract about 2000cfs from the Livingston graph to get an approximation of expected flows at Corwin. 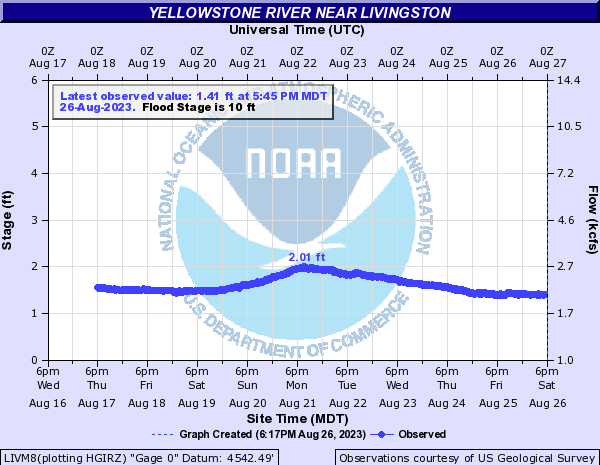 That big spike Tuesday afternoon will definitely be “all she wrote” for the runoff break fishing. Temperatures in Livingston are forecast to rise into the high 80s by next weekend, and that will send the remaining snow GUSHING down. Expect rivers to begin dropping again about 3 weeks after they shoot up.

Walter made a thorough post about likely summer streamflow and fishing conditions over at his blog. Rather than reposting it and hurting the SEO for both our sits, I’ll just send you over there.

A note on shop ops right now: the shop is open on normal off-season hours of 9-5 daily and 10-4 on Sundays, with occasional unannounced closures. Please follow social distancing guidelines by limiting the shop to one group traveling together at a time. We are available for mail-order business as well as booking guided trips for the high season.

Yellowstone Park still has more stringent masking requirements than any surrounding states. Current park requirements are listed on this page.

Also note that as commercial operators, we must follow additional requirements not listed on the linked page. In particular, all passengers in our vehicles are still required to wear masks while in Yellowstone National Park. Assuming people continue getting vaccinated and case numbers continue to fall, we expect this requirement to be relaxed through the summer season.

As readers should know from previous posts on the subject, winter and early spring snowfall and how this snow melts from April into June are the most important drivers of summer water conditions in our area. I make reports on the progress of the snowpack through the end of the spring runoff in late June or early July, with the reports getting more detailed as the season progresses and we start to get a firm handle on what to expect.

In general, we like to see snowpack between 100% and 120% of normal, with 105-110% absolutely ideal. With snowpack at this level, waters drop out of the spring runoff at about their normal time (between early June and July 10 depending on the water in question), but flows remain high enough and therefore cool enough through late July and early August for the fish to remain aggressive and happy. With higher snowpack, the fishing once the water clears is great, but we start late and miss much of the prime summer tourist season. In 2011, we weren’t able to begin floating the Yellowstone until July 28, for example. If snowpack is dramatically low, we get an early start and have good fishing until about mid-July, but mid-July through late August can be tough fishing and we may need to start and end early.

As of right now, here’s where we’re at. Our approximate operations area is circled in red. I have also added in the drainage basins for the Upper Yellowstone system in Wyoming and Yellowstone Park (including the Lamar and Gardner Rivers) and the Madison/Gallatin basin in Yellowstone Park, including the Firehole and Gibbon Rivers.

We still have a good six weeks of “snowpack building time,” and the above outlooks do not look likely to drastically change our overall snowpack numbers, though I do expect them to decline a few points. We’ve had a warm winter, so the medium-elevation snow will start melting as soon as it gets rained on.

In regards to most of our operations area, in particular the Yellowstone Basin inside and outside Yellowstone Park, I should note that assuming the “average to somewhat high” snowpack numbers we’re seeing so far continue, we should have good to excellent water conditions for this summer, the fourth year in a row things have run average to a bit above. This will be the first time in my career (20 seasons counting 2020) that we’ve had this many years of solid water conditions in a row. We had great fishing and healthy fish last year, with the Yellowstone seeing probably its strongest average size range in at least ten years. Will this trend continue in 2020? I wouldn’t bet against it…

The Madison/Gallatin Basin inside Yellowstone Park is a different matter. It would not surprise me to see this snowpack drop to 85% of normal by the end of next week, with the bulk of the drop in the lower-elevation Madison portion of this shared basin. The storms have generally been going either just north of the park or just south of it, leaving the Madison Basin inside the park just off the storm track. This below average snowpack could become a problem if the forecast warmer than average weather for the next three months materializes. The Madison outside the park should be fine, particularly upstream of Ennis Lake, but the Firehole, Gibbon, and Madison inside the park might suffer due to low/warm water this year as they have not since 2016. The Firehole in particular may wind up getting too warm by around June 20, whereas it has fished well through June the past few years. We’ll have to wait and see on this. If you’re a Firehole-lover, I suggest doing some snow dances.